Universal Health Care not the answer?

In a survey of almost 1,400 physicians by physician recruiting firm LocumTenens.com, 20 percent of respondents say they’ll stop practicing medicine if the next U.S. president enacts universal health care insurance coverage. Although 62 percent say they will continue practicing the way they do today, 11 percent say they would change occupations and 9 percent said they would retire.

"These physician survey results signal to government officials and insurance industry executives that they must not discount physicians’ potential response as healthcare reform is implemented," LocumTenens.com President David Roush says. "Any type of reform that further reduces their autonomy and income-earning potential will exacerbate the growing U.S. shortage of physicians."
A 2006 report from the U.S. Health Resources and Services Administration projected a shortfall of 55,100 physicians by 2020. Richard Cooper, MD, director of the Health Policy Institute at the Medical College of Wisconsin in Milwaukee and national expert on physician workforce issues, has projected a shortage of 50,000 physicians by 2010 that he says could expand to 200,000 by 2020.
When asked which presidential candidate has offered the soundest plan for improving the delivery of healthcare services for all Americans, more than half of responding physicians (52 percent) say, "None of the remaining candidates has offered a solid plan."  However, only 5 percent of the physicians surveyed say the best solution to U.S. healthcare reform is to leave the current system in place. 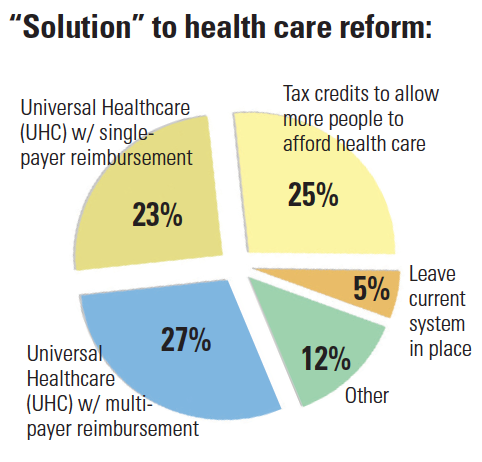 Physicians are nearly evenly split over which political scenarios designed to fix the U.S. health care system would have their support.
UO’s RECENT SURVEY (MAY/JUNE 2008 ISSUE) ON PROPOSED HEALTH CARE fixes showed a lack of consensus among physician respondents. The largest group - by less than 10 percent - agrees with health economist Mark Pauly that Health Savings Accounts are not the fix to the problem and that neither political party has offered a workable solution. The other three philosophies on fixing the system eash drew roughly 20 percent of the vote.
When asked which of the experts interviewed in May/June 2008’s cover feature "Picture of Health Care" best reflected their beliefs - physicians said:
30.4% Health Economist Mark Pauly: Health Savings Accounts are unnecessarily complicated and restrictive; there are better ways to address uninsured. Unfortunately, neither political party has offered an acceptable solution.
21.4% Advocate Don McCanne, M.D.: Privatizing Medicare only feeds the bureaucrats and weakens physicians’ participation in the traditional side of the program. We need to dimantle the private insurance system in favor of a government-controlled single payer system.
19.6% HMO CEO Georganne Chapin: The Medicare Modernization Act operates on a poor fiscal model and HSAs don’t provide the same financial security as insurance. We should scrap such complicated plans in favor of a single payer system.
8.9% None of the Above