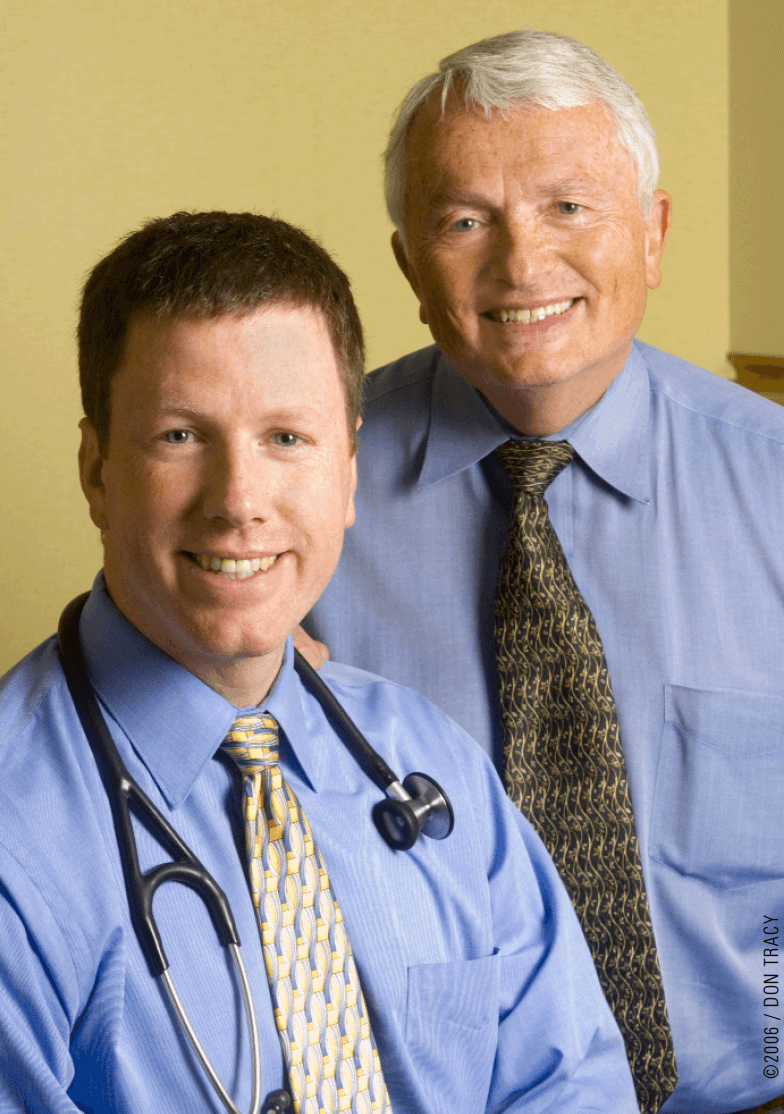 Following in their footsteps

The parent-child relationship can be complicated.

On its own, especially once the “child” is an adult. But throw that relationship into the realm of everyday medical practice, and even the most compatible duos could be sorely tested. Statistics aren’t available for how many physicians practice with their grown children (and vice versa), but a case could be made that you’ll find such a pairing in just about any given city or town’s Yellow Pages under the heading “Physicians.” Some pairs are employees of a larger hospital system. Some run a practice together. Below are three teams of doctors whose mutual respect—and in some cases, senses of humor—have made it work.

The doctors Trubow practice together at Harvard Vanguard Medical Associates in Wellesley, Massachusetts. Marshall Trubow works just two doors down from his daughter. Both father and daughter say the situation is mutually beneficial, but it was not one that was crafted during Wendie’s childhood. Of course, Wendie was aware of what her father did for a living while she was growing up. He occasionally brought her along to work during those years. Her mother worked in a women’s clinic, so Wendie understood the medical world, but it wasn’t what she would identify as a “calling” for herself. And Marshall Trubow let his daughter find her own way.

“I graduated from college in 1992 [with a bachelor’s degree in psychology] and worked for two years in multimedia sales,” Wendie says. “It was strange, but my clients kept asking me medical questions. In 1994, I decided to go back to school to study medicine.”

The elder Trubow recalls being pleased that Wendie was in medical school, and he encouraged her along the road to ob/gyn. She surprised herself by pursuing it. “I said I would never do a surgical rotation,” she says, “but I found I really loved it.” But when she told her dad she was considering an oncology fellowship, he says he asked her, “Do you really want to work that hard?”

“A urogynecology fellowship, I would have encouraged,” Marshall says. “With the aging baby boomers, it’s taking off as a specialty, and the work isn’t as grueling.”

Wendie says she heeded her father’s wisdom about the oncology fellowship and has no regrets. “Oncology requires an additional three-year fellowship,” she says. “It’s brutal—emotionally brutal, physically brutal—and also very competitive. I probably would have been miserable.”

When it came time to consider working together, neither doctor hesitated.

“I wanted to be in a place where he was accessible,” Wendie says. “The way I look at it, when I cook, I use the best pots and pans and the best knives. When I’m working, I want the best support around me.”

Marshall Trubow points out that his daughter did go through the standard interview process to work for Harvard Vanguard and that the elder Trubow had no direct say in whether Wendie was hired. Both employer and Wendie were happy with what the other could offer. “She really could have been placed anywhere in the Harvard Vanguard system,” Marshall Trubow says.

Before Wendie joined the practice, neither she nor her dad felt the need to discuss the parameters of their professional relationship.

“I did jokingly say, ‘Oh good, you can cover my night call,’” says Marshall Trubow. “But I ended up covering for her while she was on maternity leave.”

The two don’t share many patients, anyway. Marshall’s patients are mostly post-menopausal, and Wendie sees many adolescents who are just starting out with their reproductive cycles. Still, the younger doctor does do what her dad calls “armchair consultations” with him.
“She’ll say, ‘What do you think?’ and we’ll discuss the case,” Marshall says.

“I’ll have a patient with a high grade lesion on her cervix,” Wendie says as an example, “and I’ll ask him if he would do what I’m thinking of doing.”

Generational differences in their approach to medicine are few, both doctors say.

“He’s done a very good job staying current,” Wendie says. “And I ask him to scrub in on cases I think will be hard. For example, one of my patients was a woman with a benign tumor the size of a cantaloupe—and this was a tiny, size-zero woman. She wanted the tumor removed laparoscopically. That one I didn’t want to do on my own!” Marshall, whose subspecialty is laparoscopic surgery, happily scrubbed in. The surgery was successful.

Wendie notes that because they work for Harvard Vanguard, she and her father are shielded from the potentially large stress of running the practice.

“That, I think, could be very difficult when you’re practicing with a relative,” she says.

Patients have been receptive to the father/daughter team, and other staff members have been happy with the arrangement, too.

“She has fit in well here,” Marshall Trubow says of his daughter. “It could have been tough for her, but she’s holding her own very well.”

Leo Todd, DO, didn’t weigh in with his opinion about which specialty his son Greg should pursue when he entered medical school. “I didn’t want to force him into primary care,” Leo Todd says. “He was the one who decided to do it.”

But after Greg Todd, DO, made the decision to follow in his father’s footsteps and began considering joining him in practice, the elder physician reacted with enthusiasm.

“I told him, ‘By the time you come in, I’ll be in my early 60s, and you can eventually take over the practice,’” Leo Todd says.

While it sounded good on paper, Greg says he did have some trepidation about joining his dad’s then-solo practice.

He’s now been working side-by-side with his dad in private practice in Allentown for the last five years. To his relief, Greg Todd found little negative reaction from his dad’s patients.

“Our personalities are not exactly the same, and of course people notice that. The first six months to one year, there was a little bit of, ‘Well, that’s not the way your dad does it,’ but these were patients who had been with him for 20-plus years,” the younger Todd says. “Overall, the reaction has been more positive than negative.”

“Some older patients want an older physician,” his dad adds. “But Greg has brought in younger families and patients, and that’s been good for us.”

Both doctors admit there are generational differences in the way they practice.

“We each have a different approach,” says Leo. “I’ve seen things and treated things many times. I tend to believe there’s too much testing done nowadays because of liability, and it can be a waste of money. Greg tends to hospitalize patients quicker than I would, but that’s okay.”

Greg puts it another way: “Medically, I’m more aggressive than my father. I also teach residents, and they keep my on my toes.” The younger doctor is quick to say that his dad respects his opinion and is a source of good feedback.

“If there’s something he doesn’t know, he’ll confer with me,” Greg says. “If I need advice, I’ll confer
with him.”

One of the most positive aspects about being in private practice together is trust in the partner’s ethics. Greg says he knows people who have experienced internal theft from their practices. “We both knew that wouldn’t be a concern,” he says of himself and his father.

The administrative side of a practice is still not altogether fun, father and son admit.

“We do the whole ball of wax, unfortunately,” says Leo.

“We don’t always see eye-to-eye on the business end of things, but we know how to work things out,” Greg says. “At first, I sat back to see how things worked. Then I gradually got more involved. Now, he takes care of the books and I oversee administration.”

Both physicians agree the experience has been more positive than negative.

“I am definitely going to stick with it and take over the practice eventually,” Greg Todd says.

Lynn Bartl, MD, didn’t always want to be a neurosurgeon like her dad.

“I wanted to pursue law when I was in high school. I used to tease him that I would be a malpractice lawyer some day,” she says with a laugh. “But I was always best at natural sciences. My undergraduate [college] degree was in vertebrate zoology. Medical school was a logical next step.”

Her dad’s influence really did start earlier than she realized, she says now.

“Growing up, I knew he loved what he did, and his patients were always so grateful. People would approach him when we’d go out as a family and tell him how he had changed their lives,” Lynn says.

But when she started expressing an interest in neurosurgery during medical school, Lynn’s dad did try to talk her out of it “in a sense.”

“He said, ‘Why not try anesthesiology or emergency medicine? Then you’re either on or you’re off,’” she says. “He was worried about the demands of the career.”

Lynn, who was born while her father was still a resident, was well aware that he was gone a great deal during her childhood because of
his job.

Staffing Would you apply to your job...