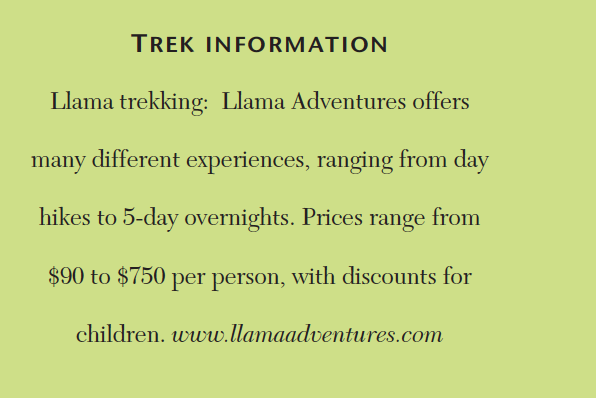 On the trail to enchantment

Dave Jaffee, MD, won our annual guys-only vacation competition this year, where the five of us each pitch a wacky destination and try to persuade the others to vote our way. Frankly, the rest of us would have preferred to sail in the Virgin Islands, feet up, sipping Sam Adams and cracking open lobsters. But Jaffe, a dermatologist from Havre de Grace, Maryland, was convincing. How bad could it be, the rest of us figured, hiking for three days in June in the famed Sangre de Cristo mountains of New Mexico? And with a string of llamas carrying our loads, no less. Piece of cake, no problema we joked.

Six hours into the first day’s hike, at an oxygen-deprived 11,000 feet, problems were sprouting faster than mushrooms from the rotted logs around us. We had hiked four miles uphill, we were sore, we were chugging water like an Oktoberfest drink-off, and we felt slightly dazed by our mild altitude headaches. Yet, during a break, while sitting next to a magnificent waterfall and thunderous stream, all enveloped by a dense forest of fir and yellow-leaved poplars, we knew in our hearts that our efforts were being richly rewarded. With base camp only an hour away, we were tantalizingly close to Shangri-La.

We spent the day before the hike in Taos, its 8,000-foot altitude giving us a chance

to acclimate. In retrospect two days might have been even smarter, especially since Taos is such a fun place to explore, with its selection of art galleries, historic locations, and great eats.

Our trek began the next morning, some 45-minutes from Taos. On the shore of mountain-rimmed Cabresto Lake, at an elevation of 9,000 feet, Stuart Wilde, the owner of Wild Earth Llama Adventures, met us with six of his 14 llamas. In order to make it to our base camp before dark, we hustled to pack our clothes and personal items into bags that would fit comfortably onto the llamas’ backs. The remainder of the bags were stuffed with food, cooking equipment, tents, and other camping paraphernalia.

Once we were packed, Wilde gave us an introduction to the nature of llamas (gentle and very easy going), their likes (grazing), their dislikes (petting their faces too aggressively) and peculiarities (they hum constantly, the land equivalent of whale songs). All our llamas were males, capable of carrying larger and heavier loads. The presence of even one female would turn the normally docile males into uncooperative, testosterone-crazed hunks vying for her attention. After a quik map and compass orientation to the 20,000-acre Latir Peak Wilderness area, an admonition to drink constantly, and a quick review of what to do if we encountered bears (thankfully, we didn’t), we were off. 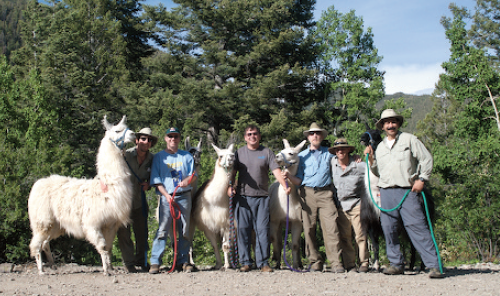 The five of us have been friends for years. Scott Brown, MD is a physiatrist, Jaffe a dermatologist, and Sherif Osman, MD an internist. Terry Sexton is a concrete contractor. And yours truly, writer and author. Our travel tastes range from 5-star luxury hotels to back-country biking, so agreeing to one adventure is often a challenge.

The trail we climbed en route to base camp was rocky and narrow, so we hiked single file, each man leading a llama (pronounced yah-mah).

“The scenery is incredible,” Osman said on one of our rest breaks. “The scent of the pine needles, the constant roar of Cabresto Creek cascading down the mountainside… I don’t know about you guys, but it puts me into a meditative space,” a welcome change from his hectic medical practice.

Llamas do not like to stand still, so whenever we rested they continuously hummed softly to one other, each with a distinctive melody. The effect was eerie; their tonal sounds resonating perfectly with the natural world around us.

At 11,200 feet we finally crested a ridge, crossed a shallow stream and entered base

camp, a lush alpine meadow sprinkled with tiny blue and white wildflowers and surrounded by protective dense forest. After congratulatory high-fives, we offloaded the llamas, loosely tied them, set up camp, and collapsed on the thick grass for a quick nap. Only when we awoke did we realize how stunning our campsite was. The meadow sat in a hollow, encircled by snow-capped mountain peaks. The llamas grazed contentedly.

The smells of a gourmet dinner wafted through the thin air, courtesy of Wilde, who thankfully trained as a chef in a previous life. In fact, mealtimes—with fresh salads, cheeses, gourmet olives, various kinds of humus, grilled salmon, even desserts—became joyous occasions. Wilde reminded us to hydrate continuously, which translated into at least a gallon of water a day.

At elevation the weather changes quickly. One minute it is sunny and clear with few clouds, the next minute the clouds gather into dark thunderheads, so that we experienced highs in the upper seventies and lows in the lower thirties. Layering is the comfort byword. One evening, for example, within minutes of descending from a hike to 12,700 feet, the skies opened and pea-sized hailstones pelted our camp for an hour. Fortunately, Stuart had anticipated the weather and erected a tarp large enough for all of us to sit under.

Hygienic facilities were, to put it politely, primitive, consisting of toilet paper, a shovel and several thousand acres of seating. Germicidal lotion pumps were always available, but there were no shower facilities. Washing involved drawing a plastic bucket full of ice-cold water from the stream, washing with biodegradable soap and rinsing very gingerly.

It was difficult to choose which part of the day was the most memorable. By daylight, the views on our hikes were spectacular. Once the 12,000-plus foot summits were crested, the views stretched far into Colorado. But at night, the mountains became a very special place, indeed.

As the sun set, the stars put on an incredible show, the bands of the Milky Way so dis tinct you’d swear that a ribbon of pure white clouds was descending into camp. By the time we bedded down, the only sound you could hear was the stream bubbling through camp and the periodic contented moans of the llamas. Then, as night settled comfortably into the camp, even the llamas went silent. When we would get up during the night to heed the call of nature (even on a mountain a gallon of water is a lot!), the llamas would be sitting on their haunches, alert, chewing their cud, the moonlight reflecting off their soft fur. They served as sentinels, which is reassuring when you are urinating in utter darkness in bear territory.

Mornings were a bustle of activity. Depending on the day’s plans, we typically loaded up the llamas and headed out for a hike up one of the mountains.

As it turns out, base camp sat only a short walk from Heart Lake, a glacial pond completely enclosed by mountains and dense woods, its water so clear you could see the rocky bottom. Sunrise at the lake was transcendent. As the sun burst over the snow-capped peaks, the light green leaves of aspen groves shimmered in the sunlight against the darker greens of the conifers.

The four-hour hike from base camp to Latir Mesa was challenging, but rewarding. At the summit, a herd of bighorn sheep grazed and elk roamed in the distance. The views from the summit were awesome, stretching from the Wheeler range that rings Taos in the south to the southern Colorado mountains. “That hike was amazing,” recalls Brown, the chief of the Department of Physical Medicine and Rehabilitation at Sinai Hospital in Baltimore. “Carousing with Rocky Mountain Big Horn Sheep on the peaks like two feet away—that was just incredible!”

All good things must end

Coming down from base camp at the conclusion of our trip, the tenor of our tight group changed. We were headed back to appointments, patients, and deadlines. We hiked quietly, each absorbed in his own thoughts. But, as we approached the parking area, we began to debrief about the experience.

One thing we all agreed on was that the trek would be perfect for a family, especially one with young teens who were interested in animals. Every day brought opportunities to feed or groom the llamas and to appreciate their patience with us humans. In fact, a few weeks after our hike, Jaffe took his fiancée on a llama hike in nearby Colorado.

“I was struck by how sweet the experiences were, both times,” Jaffe says. “We’re already planning to return with our extended family. I know our kids would love this.”

Wilde himself was a big part of the trip’s ambience. He was full of interesting and humorous stories gleaned from more than 20 years of guiding. “What impressed me the most about Stuart,” says Osman, “is his detailed knowledge of wilderness medicine.”

Most of all, the trek was a chance for us all to leave behind the prescribed and synthetic, and to recharge in the tranquility and wonders of the natural world. 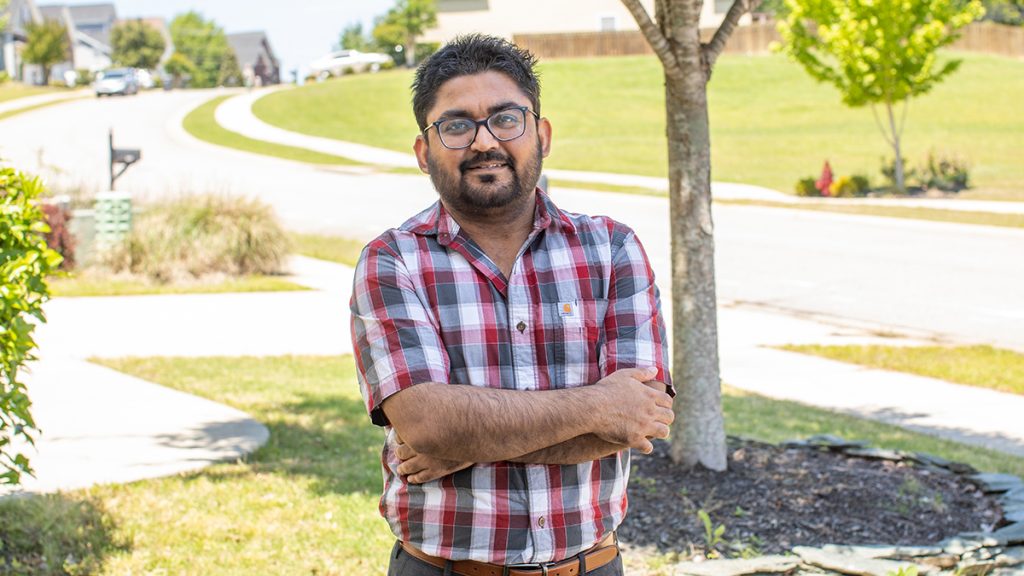