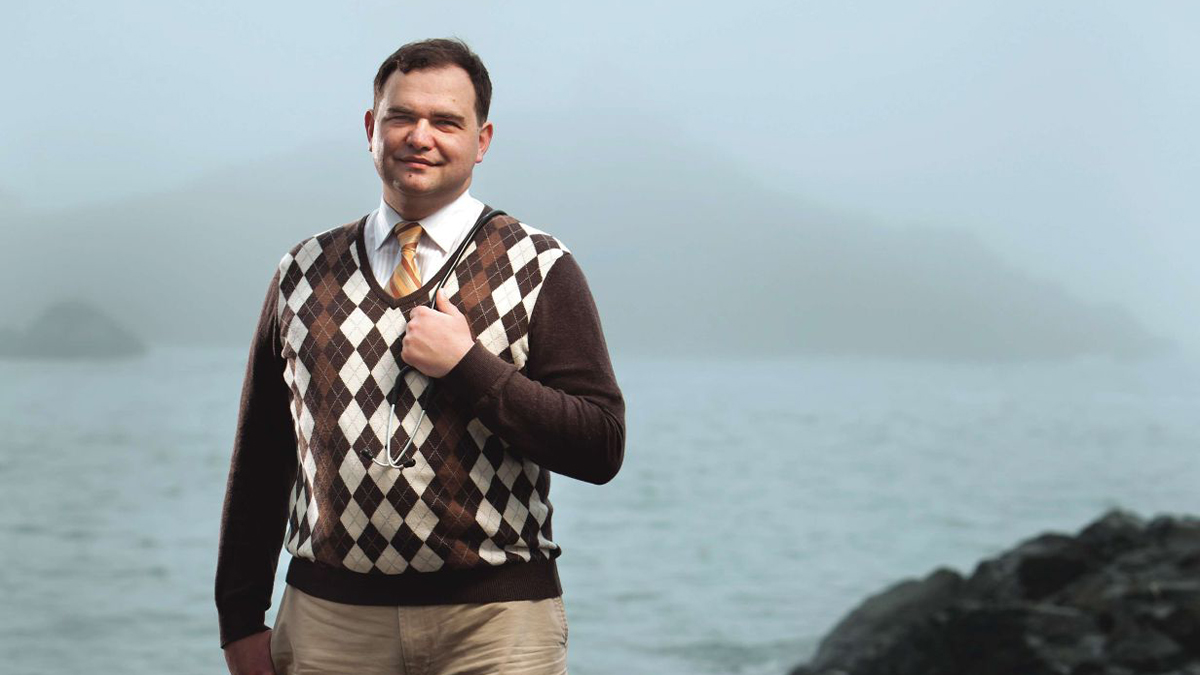 Two weekends a month, Brett Yockey, M.D., a third-year radiology resident at Indiana University in Indianapolis, gets in his car and drives two hours south to run the emergency room at a rural hospital.

Yockey isn’t the only doctor to tack additional shifts onto his already busy residency rotations. In fact, other residents from his program make the same two-hour trek to that hospital, although not all residents at Indiana University are permitted to moonlight.

Emergency residents, for example, are prohibited from performing any additional medical services outside their residency, which may be why the need for emergency room help existed in the first place at the community hospital.

Leon Aussprung, M.D., J.D., LLM, moonlighted during his residency at Thomas Jefferson University Hospital in Philadelphia and later as an attending physician while enrolled in law school. Aussprung often picked up extra shifts generally filled by residents. There simply weren’t enough residents to meet the hospital’s need for coverage, he explains, and his pediatric residency program permitted moonlighting. So he worked a few night shifts at Thomas Jefferson and other hospitals in the Christiana Care system.

To qualify for these additional shifts, Yockey and Aussprung had to hold a permanent license, which involves completing the first year of residency and passing a “Step 3” licensing exam. With that, Yockey was permitted to stand in for emergency room physicians on weekend shifts, and Aussprung often manned the neonatal intensive care unit (NICU).

Not all moonlighting opportunities require a permanent license, however. As a second-year family practice resident at Boston University (BU), Michael Noonan, D.O., discovered he was eligible to moonlight at the residency facility where he was based as long as he was already doing rotations there. To work anywhere outside BU’s hospital system, however, he needed an unrestricted, or permanent, license.

So Noonan began exploring moonlighting opportunities to make some extra cash, and discovered fairly quickly that he could pick up extra shifts in admissions at his hospital. From the middle of his second year of residency to the end of his third year, he admitted patients to the hospital and assisted in morning rounds.

He would work 12- to 14-hour shifts, generally 7 a.m. to 7 p.m. on Saturdays and Sundays, one to three times a month. In exchange, he earned $75 per hour, or about $2,700 for those three shifts, which, he points out, “was about what I  was making after taxes as a resident.” That additional cash “can be a huge differential for a person in residency,” he says.

Aussprung also started his search for moonlighting work internally and had no trouble finding it. His residency director routinely alerted the residents in his program to moonlighting opportunities—shifts that needed filling within the hospital—and he pursued it. He could make about $1,000 working a 24-hour weekend shift, and frequently did.

Yockey contacted headhunters in the Indianapolis area to find his moonlighting gig, who inquired about openings he might be qualified to fill. Most hospitals wanted a board-certified physician, he reports, which he wasn’t. But one headhunter had a hospital willing to accept a doctor without those credentials. He got the job.

Noonan reports that physician staffing groups frequently have part-time work appropriate for residents and are a popular place for residents to begin their search. Although he did not approach them about moonlighting opportunities, placement services such as these are a smart starting point.

Am I allowed to moonlight?

The department of psychiatry at the University of Rochester Medical Center, for example, allows licensed residents in their final year of training to moonlight within the hospital’s own emergency service. However, says Glenn Currier, M.D., MPH, director of residency education in that department, “Their moonlighting has to be approved by both the residency director and the emergency department director on a case-by-case basis.”

The rationale is twofold: 1) “U.S. medical students often graduate with crushing debt loads, and we feel it important to recognize that fact if we want to attract good people into our field,” and 2) “If a graduating resident can’t handle this work, it is better to know that so that remedial steps can be taken before we send them out into the world unobserved,” he explains.

Moonlighting residents here have backup: An attending is available by phone 24/7 to answer questions or to get to the hospital within 30 minutes in case of an emergency.

On the other hand, the obstetrics and gynecology department at the same hospital expressly prohibits moonlighting.

Ruth Anne Queenan, M.D., MBA, the associate professor of obstetrics and gynecology at the University of Rochester Medical Center who oversees its residency program, explains, “Since the OB/GYN residency involves so much night and weekend coverage, the only way to guarantee compliance with work hours is to not allow moonlighting.”

Queenan is referring to New York state’s law explicitly capping resident work hours at 80 hours per week. New York state closely monitors and restricts the number of hours medical residents can work—exceeding those hours yields citations and fees for noncompliance that the hospital does not want. 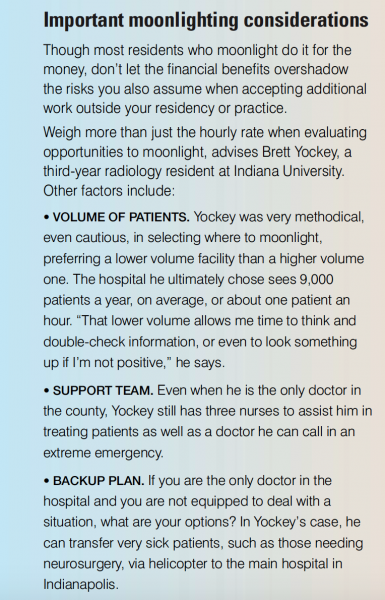 “Usually residents working 9-to-5 hours are more likely to moonlight because they have the time,” says Diane Hartmann, M.D., senior associate dean for graduate medical education at the University of Rochester Medical Center. But all residents are aware of which programs at the University of Rochester permit moonlighting and which do not. That news “is in the program information,” says Hartmann, “so residents know upfront that they won’t be able to augment their income.”

The Accreditation Council for Graduate Medical Education (ACGME) provides the following standards on resident work hours: Moonlighting must not interfere with the ability of the resident to achieve the goals and objectives of the educational program, and internal moonlighting must be considered part of the 80-hour weekly limit on duty hours.

However, moonlighting outside a residency program appears to fall into a gray area.

Other states allow hospitals to set their own guidelines, and many do have an 80-hour limit but as a weekly average. However, no one shift can be longer than 30 hours, reports the American Medical News. That means a resident could theoretically work 100 hours one week, 60 the next, and still be within compliance. With such flexibility, tacking additional hours onto a resident’s workload becomes possible, when permitted.

It might instead be a desire to avoid complete exhaustion that has you turning down moonlighting shifts.

Getting permission to moonlight

Even if residents are able to find the time, moonlighters-to-be must still request and receive permission to work outside the residency.

Yockey had to request permission from Indiana University to work extra hours on top of his residency obligations, including detailing the hours to be worked and providing proof of malpractice insurance coverage. As a resident, he is covered by the university’s medical malpractice policy while working in their healthcare facilities, but when working anywhere else, he needed to either confirm that the employing hospital covered him or would have to carry his own medical malpractice insurance, which can be cost-prohibitive.

Noonan was covered by the medical malpractice policy in place at the Boston facilities where he moonlighted, just as Aussprung was covered by Thomas Jefferson University Hospital. As long as they were working in affiliated facilities, neither had to explore paying for their own malpractice insurance.

Although medical malpractice insurance rates vary by state and by specialty, even the least expensive coverage can cost big bucks.

Coverage for internal medicine in Indiana, where Yockey works, for example, averages around $10,000, according to the 2008 Medical Liability Monitor Rate Survey, depending on the location. OB/GYNs in that state pay close to $70,000.

In Massachusetts, where Noonan completed his residency, malpractice rates for internal medicine are slightly higher, at $13,250, according to the survey,

Given the high cost of obtaining medical malpractice insurance on their own, most medical residents limit their moonlighting to facilities that provide malpractice coverage for them.

The good and the ugly

Few residents would disagree that money is a major motivator when it comes to moonlighting. Earning the equivalent of 50 percent or more of their monthly salary by putting in a few extra hours is quite enticing to residents and to new attending physicians with sizeable student loans or family expenses to cover.
Yet money isn’t necessarily the only benefit residents ultimately receive.

Noonan found that the experience “really bolstered my skills, and I gained an understanding of the inner workings of the hospital.” He continues, “You’re on your own in a lot of ways and you have a lot more responsibility when you’re moonlighting.” As a result, “I learned how to get things done,” which he discovered was “pretty transferable to other health systems.”

Echoes Yockey, “I’m definitely more confident [as a result of my moonlighting], and I have a cooler head.” What he considers a “great experience” has subsequently led to “tons of job offers,” too.

That is the upside of putting in additional hours, but there are downsides.

“It’s a hellish job,” says Aussprung. “When you’re moonlighting as a resident, there are other residents and attendings around,” Aussprung points out. But when moonlighting outside your residency, you could be the only physician in the hospital. “That’s a very different experience,” he says.

Calling it “trial by fire,” Aussprung explains that as a resident responsible for an entire department on your own, you face more pressure. Bad situations also arise that you may not be equipped to deal with effectively. And there may not be an attending around to back you up or assist you, he reminds. For that reason, “it’s not for everyone.”

The farther you are from your home institution, the more you should expect to work alone, says Noonan. You’ll be making decisions independently, he says, and taking on responsibilities earlier than you might have expected.

You may also face scheduling conflicts, as he did from time to time when he began taking after-hours calls for the family practice department as part of his residency rotation.

Unfortunately, sometimes those days would occur during his scheduled moonlighting duties, and he had to decline the moonlighting shift. “I doubt any residency would be flexible about moonlighting conflicts,” Noonan observes. Residency commitments always come first.

After working a full week as a resident and then adding a shift or two on top of that on Saturday or Sunday, he burned out. By the end of his residency, he had cut back substantially on any moonlighting.

Yockey continues to moonlight and says, “I really enjoy the work I do.” But, he admits, missing out on time with his family is a big disadvantage. The good news is that, for him, it’s the only disadvantage.

How the physician shortage will impact moonlighting

“Looming physician shortages in many parts of the United States will create more opportunities for residents to moonlight,” says Lisa Vognild, director of physician placement at Sanford Health in Sioux Falls, S.D.

Filling those opportunities, however, may be difficult as the U.S. is impacted by two major trends.

The first trend is the preference of younger doctors to work less, says Vognild. Younger physicians are working fewer hours than previous generations mainly due to a desire to have a more balanced life. “There is a different mindset today than in previous generations of doctors. Younger doctors have changed the role of the physician, a role which used to be based on working an 80-hour week.”

The second trend is the increasing number of women in residency programs who try to juggle medical training and starting a family. The result is fewer female residents available to take additional shifts, as well as additional shifts needing coverage due to maternity leaves.

Noonan’s classmates are cases in point. No one moonlighted in the class ahead of him, and only one resident in the class behind him did. In his class, two other residents moonlighted, but “people were not very interested in doing it,” Noonan observes.

However, for residents in need of additional cash, moonlighting can provide welcome financial reward as well as invaluable experience at the starting point of their careers. 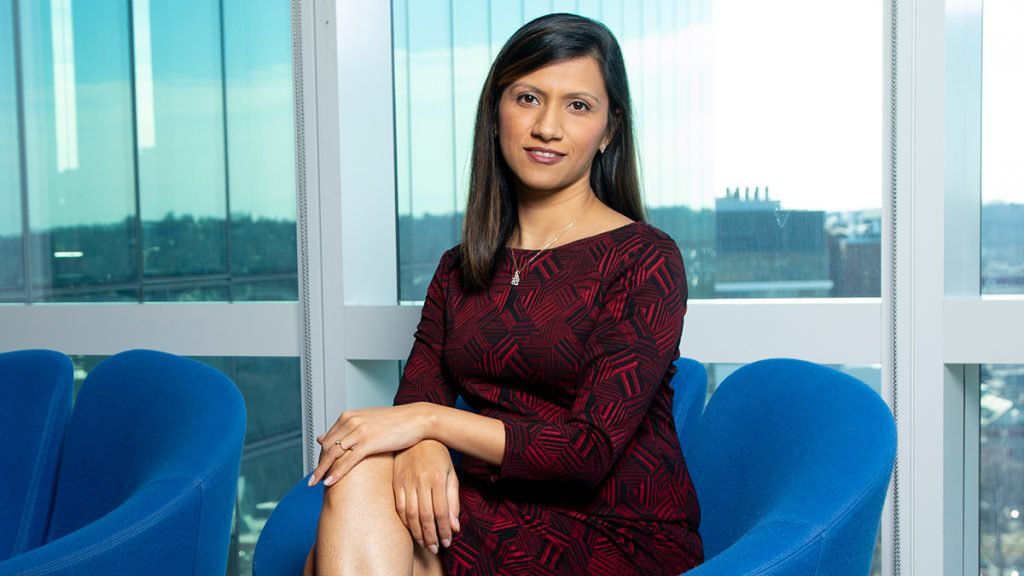 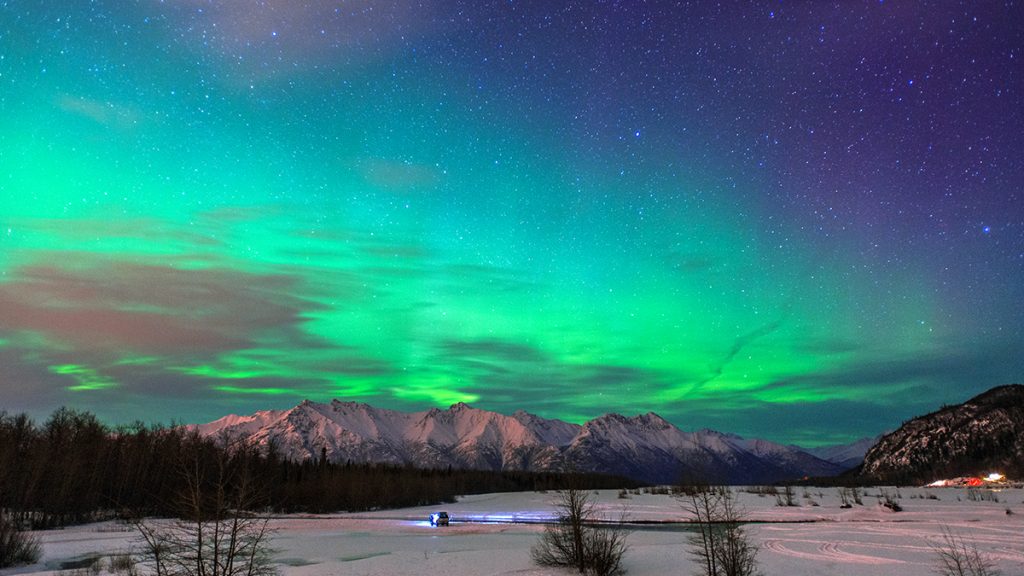 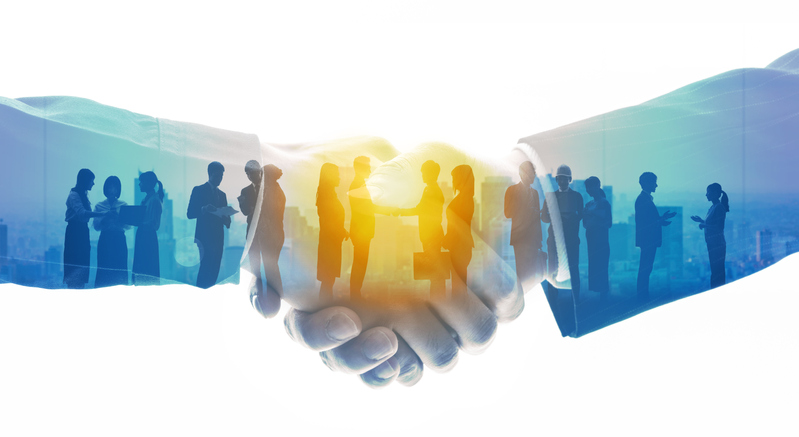