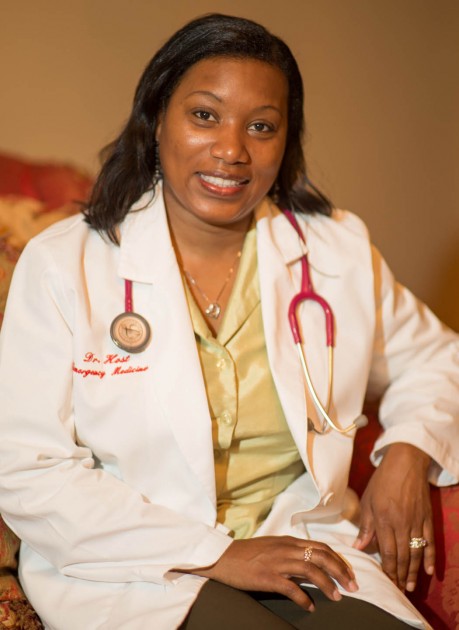 Host has been married to her high school sweetheart, Chris Host, for 20 years. Their son, Justin, is 2. Host is on her fourth deployment as a Lt. Col. in the Army, which she joined after medical school. She enjoys traveling and getting to know other cultures, running, and family time.

Pick the state you would like to live in. Think about where you want to be. What does that state have that makes you want to be there? If you’re someone who likes the city, then you’ll want a state that has a big city. If you like the country, you’re not going to pick New York City. Figuring out what it is you like and finding a place that offers those things to you is a good place to start.

The administration aspect of medicine. Medicine has changed a lot since I started out. There’s a lot more administrative oversight. I think they should teach things such as medical director leadership, peer reviews and patient-physician relations.

What was unique about your job search?

I joined the Army after medical school. I saw the sign and thought, "Oh, that looks like a good thing to do - I think I’ll join." Fourteen years later, here I am. For me, it has really been very enjoyable, very rewarding, just very satisfying. It’s always great to work with people who have the same mission, and everyone is working toward the same goal. You have a lot of rewards for being in the military. You can have your physician career and retire from that, and you can have your military career and retire from that. And it’s not taking much more out of your life than having a civilian career. For me, it has worked out quite well.

Figure out where you’re going to work, then pick your home close to that. In a state like Georgia, you could have a job that’s an hour and a half away. It’s not like New York City, where you jump on the subway and you’re there.

We were renting and then realized that where I was going to be working was not close at all to where we decided to rent. When you’re looking at hospitals, look at the hospital and the city that’s around the hospital and figure out if you want to be there. It seems like it all has to be done concurrently. I was so used to New York in that everything was close, or you jump on the subway and you’re there. But other states aren’t like that.